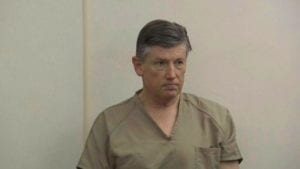 The Franklin County Sheriff's office and the Internet Crimes Against Children Task Force received a tip that 10TV Chief Meteorologist Mike Davis had sent and received "significant" amounts of child pornography.  Davis was arrested at his home Thursday morning September 5, 2019 and booked into the Franklin County Jail.  He is charged with a second degree felony of pandering sexually oriented matter involving a minor.  The ICAC seized cell phones,  thumb drives, a laptop, and computers from multiple locations including Davis' home in Upper Arlington and the 10TV studios.  Court documents allege on August 5th Davis knowingly advertised for sale or dissemination, sell, distribute, or transport an image of a young girl participating in sexual activity.  10TV posted Davis has been with the station for 31 years.  Davis was arraigned Friday morning September 6th.  Conditions of his bond include he can not use electronic devises or a smart phone and must stay in Franklin County.  He is to surrender his passport and have no unsupervised contact with minors.  His bond was set at $25,000 cash and $25,000 appearance bond.  He bonded out of jail before noon.

View all posts by: Michelle Gatchell

Cody (L) & Jack Smith (R) of Life of Kratom in Westerville & Marion popped by the show to explain what Kratom is and how it helps with both pain management and opiate addiction. Here's more, including Jack's story: lifeofkratom.com pic.twitter.com/syAb…

We chatted with legendary Hall of Fame Reds broadcaster Marty Brennaman Wed AM on our Breakfast Club w/ Mark & Sherry. Hear the interview on-demand below. my967.net/audio-mart…

Audio: Previewing the Cincinnati Reds as baseball gets underway Thursday. Mark & Sherry of our Breakfast Club spoke with Reds play-by-play guy Tommy Thrall. Reds baseball on The New My 967 or AM 1270 WDLR brought to you by @JGumbosDelaware my967.net/audio-reds…

Our Classic Hits Cafe with Bob Allen is broadcasting live on-location right now (Tues 3-23) until 2pm at the ribbon cutting party commemorating the opening of Luther EyeCare on Sunbury Road in Delaware. Pop on by, grab some food from The Dipped Donut & The Food Truck Depot pic.twitter.com/1jcS…