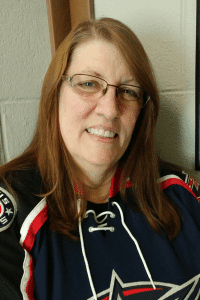 Pam Spencer
Mid Ohio native Pam Spencer has over thirty five years in radio broadcasting.  She was a traffic reporter for eighteen years.

Most of those years with 610 WTVN included flying over central Ohio with her eyes on the roadways for ten years.

On Fridays the Mid Ohio Breakfast Club features “Pam’s Jams” a local band breakdown of live music in the area.

Pam’s favorite sport is Hockey and she really enjoys going to the Columbus Blue Jackets games.

You can hear Pam and Mark Bingaman talk Hockey, and Pam will have your Mid Ohio News weekday mornings on the Mid Ohio Breakfast Club.

On the Breakfast Club Thursday am at 8:10 on the New My 967, Congressman Troy Balderson joins us for a discussion of his impeachment vote. A reminder: My 92.9 WDLR is now My 96.7 WDLR. We're still here for your news, weather, and traffic every weekday morning from 6-9 am. pic.twitter.com/KF1R…

The firefighting gentlemen of @TriTownship picked up the 2 huge boxes of toys Julie of Julie's Movers left for their Toy Drive for @PeopleInNeedInc. The event itself is this Sat 9-3. Cruise right through the fire station & drop your toys off at 495 Sunbury Road in Delaware. pic.twitter.com/dy1f…

Check out Mindy's book. We enjoyed our chat with her yesterday with mark & Bob on our Mid Ohio Breakfast Club. twitter.com/mdrayer1…